I made a concentrated effort this time, to write most of the fills in ACD context but being on a tight schedule made a dent to that goal.

UPDATE: I completed all the prompts today!!!

I really couldn't tell how this got so out of hand. I just came here to download a song that I already bought from iTunes -which btw, I have yet to open- and a small moment of curiosity led from one thing to another.

I just wanted to know if the Clinique products I just bought were a good decision. But I found out that there's this site that actually ranks things -products of any kind and now I know the brand of the "best" natural deodorants available-. Dunno how but then I got to a list, made by someone who actually went through random items on amazon and enlisted the best reviewed products, published that and made money. Listed there, there was a shower head that actually plays music and some kind of silicone brush that massages your scalp. It comes with a nice looking brush.

Later I read an article that brought about NOTHING to my life; it was just this guy who went without deodorant for four weeks. His conclusion? He actually smells worst that he thought he would. Stale popcorn and fritos were a part of the description for that funky smell. Four weeks without deodorant, all because his editor -HIS ACTUAL BOSS- told him to do it. And he lives with his girlfriend.

All of which led me to believe that perhaps I just should download the damn violin concerto, put on my Team Iron Man t-shirt and enjoy the fuck out of this holidays because it had been a really long time since I fell in what I call "the infinite loop" and this makes me feel like I'm 21 again.

Just this week I have time enough to realise I haven't saved any of my favourite fanfiction works so I decided to do just that...

Problem is...how the hell one goes about the business? And I don't just mean the technical hell that signifies (digging 'round ff.net, lj's old accounts -the ones still alive- ao3 and other sites) but what's the best format for it? and how save it in a portable device? laptop's hardrive? How to avoid saving the same fanfic several times? Because I'm quite aware this will not be a one day effort...

But more importantly..the authors would want me to save a copy of their work? I suppose that people over archiveofourown know the site has a very lovely button called "download", but what about those sites where the author simply posted her/his story and at the moment no one asked for permission to download the story.

This lead me immediatly to think about my favourite authors on the Sherlock Holmes fanfiction world, and specially on one named nlr alicia, and her stories. The site where her stories are hosted is still up. she started posting around 2007 and I think her last known activity there was on july 2008: and so next year would be a decade since she...well, disappeared and so should I be saving her creations?

After pondering this for a while with no immediate conclusions, what did got into my mind fiirmly -and I swear to god I'm not a stalker- was this:
how to you go about finding someone who's presence on the web suddenly vanished overnight??? Because from what I can read on the comments from her site, she did have plans to continue with some of her stories, so I can only hope she's alright and RL just got really engaging and then lost interest on the writing.

Whatever the situation, this last month got me thinking really hard about how damn fast life seems to be going and how slow I seem to be evolving to adapt to that. I got in lj some 10 years ago. 10 years ago I was 17, just about to be going to university and having a very different aspect of life forced upon me. Most of it for the better, thankfully, it opened my eyes to many ways of thinking and that, coupled with internet access, the natural sense of curiosity that has never abandoned me and a whole new set of people to be around, really shaped an approximation to whom I am now.

That person changed when I moved out of my parents house and started a new jobs with heavy responsabilities. In that time, a few years ago, I had to change again to adapt, which made me end my years long relationship, some personal beliefs and some attitudes as well.


I feel like another change is coming or should be coming, and that I should be getting ready to decide what to leave behind. And I think for better or worse, this whole thing about lj and its new shitty policies and lj comms and journals moving away or being shut down is another call for me to wake up and make decisions. The kind that you make when you stop distracting yourself with electronic devices or with other people; when you turn the lights off and it's only yourself you have for company.

Someone I thought my history with livejournal went back like 7 years? Not 10 certaintly...not bad, I suppose it's only fitting that my 200th post would be this one!

Sad to see the recent changes in the ToS. I'd certaintly get an external hard drive just to save almost 6 terabytes worth of content, if I could!

Or should I say a "taco" of mexican culture, just to perpetuate the hard earned stereotype we as a country have manage to succesfully project worldwide?

Anyway, I'm at the office right now and was listening to some music when a song, by this awesome group called "Cafe Tacvba" came on. Is a song that always makes me laugh and I though I'd share this because it's highly unusual, being both by the style of music -which was quite on like...some 50 years ago- and the very special, very truthful lyrics which could fit no where else but the beautiful, chaotic Mexico City. Here it is, with a rough translation effort:

Gotta admit I cackled horribly, like a 4 year old child, the first time I listened to that "pigeon's shit" part; so unexpected.


In other news I'm almost one week away from flying to London, Edinburgh and the Dubling and I feel like I've planned nothing, which is quite quite true. Still, the anxiety and happiness is beggining to grow, so I guess that's good.

So last year I did all my research and all because I had requested my vacations to be exactly in time to be able to go to Hamlet at the Barbican. By unfortunate events and lack of courage to quit my job, I had to cancel it all and I was depressed for months, because though a trip can be a trifle to many, it represented the culmination of years of efforts in two weeks abroad- yes, I went to Canada two years ago, but this was finally a different continent and LONDON and front seat to Hamlet and many more things!

However this year I took the decision to travel to London again and shall be doing just that in around a month. I'm staying in London for a week and then takin a train/plane/bus/Istilldon'tknowwhat to Edinburgh, staying some 3 or 4 days there and then to Dublin and spending the last days there to finally be back to Mexico on a Sunday.

I already reserved hostel beds in those three places but I'd really really REALLY appreciate it if some of you could give me advise -ANY KIND OF ADVICE- to make my trip smoother. I'll be going alone and though the purpouse of the trip is to also get in touch with myself -I'm really close to dropping law as a career and pick something more akin to art or sociology,have not decided yet but I know that means going back to school- I would not mind AT ALL to make friends and see other ways of living and thinking.

So that's it for today. That and that I'm quitting my job in January because I have had enough of being bossed around by idiots.

Some days I feel angry all the time and I know that's not right. I leaned too much in people close to me and when they fail me I get dissapointed and even more angry for trusting those people. So yeah, I'm hoping this trip gives me a new sense of seeing the world and the space to make decisions.

It's been some time since I had the chance to read a ACD fic as wonderful as this one. The voices, the scenery and the conversation between them (thank you Irene for saving our doctor!) are just perfect.
Thank you so much for sharing this with us!

cat_the_knife
Balancing Act
Do you think you're good at maintaining a healthy work/life balance? In your ideal world, how much of your time, energy, and resources would be devoted to your personal life versus your work life? What are your personal tips and tricks for making sure your work life and personal life don't intrude on one another too often?
Reply 4
No.
I spend 12-14 hours working plus 2 hours in transport home-work-home.
That leaves me with 8-10 hours to anything else. Now, considering I take 1.5 hours to get ready in the morning -morning time its really difficult for me, I get about 6.5-8.5 hours to leisure time, which should comprise sleep.
I normally need about 6.5 not to feel like a zombie. In a good day, I should get 0-2.5 hours free to read/paint/juggle/watch TV/read fanfic/socialize face to face with roomies or other friends via mobile.

If I decide to get out to dinner with friends on a, say monday, then I will get about 5 hours sleep.

So...if anyone up to adopt me in a developed country? I have a good sense of humour!

Title: Muérdago (which means Mistletoe in spanish)
Rating: G
Fandom: Sherlock (could be either set in Sherlock Special or ACD)
Characters: Dr Watson, Mr Holmes
Summary: A very rudimentary sketch but made with a lot of love -and eraser!
Warnings: implied slash but nothing explicit
Author's Notes: Sketched for WAdvent 2015 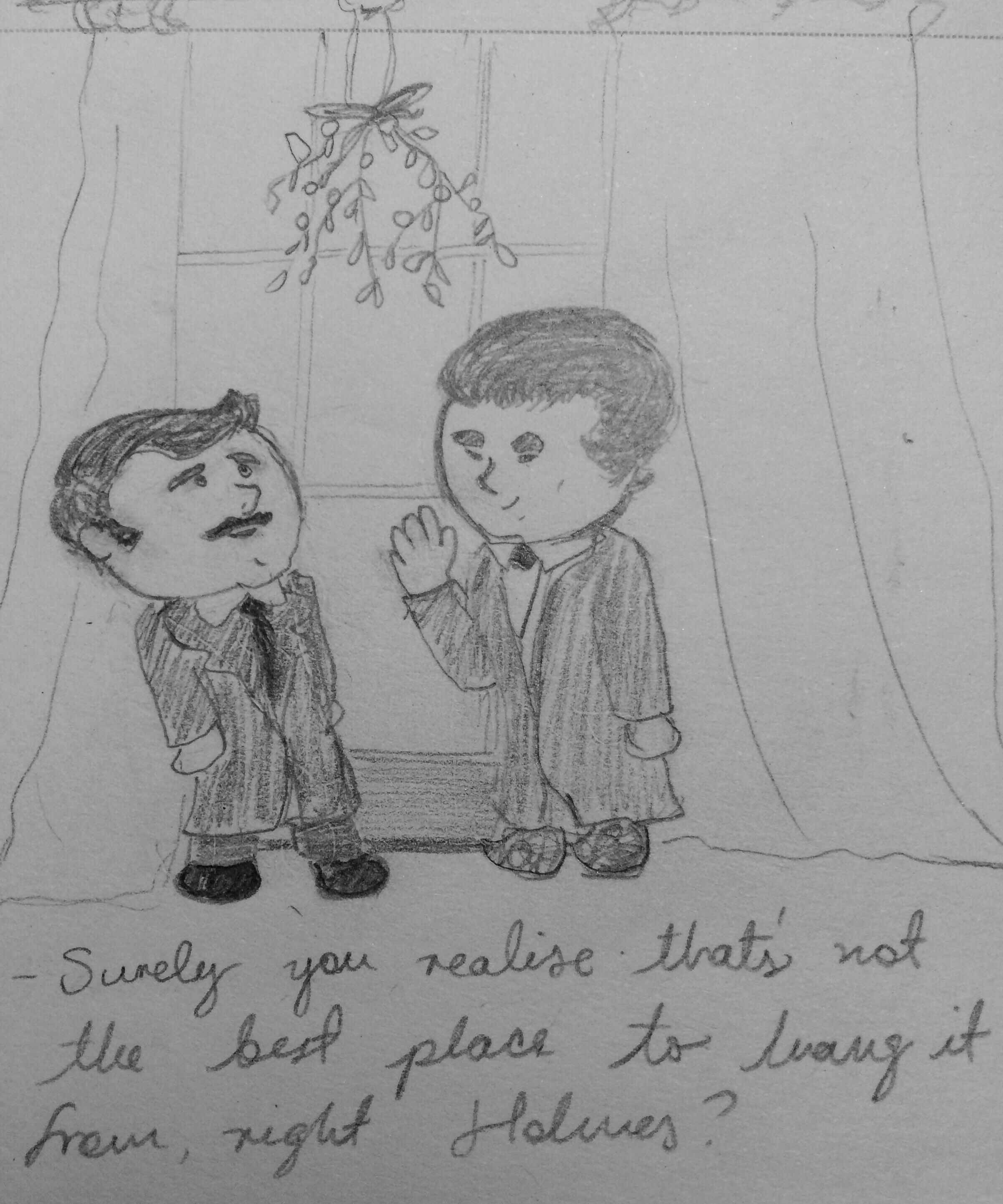 Title: Observations
Author: rojo3131
Rating: PG-13
Universe: ACD Holmes
Character(s): John Watson, Sherlock Holmes
Relationship/Pairing: nope
Summary: Watson makes up his mind about something
Content warning: rushed fic and mentions of drugs
Word Count: 153
Author note:  In response to JWP #26 "The one you were expecting" Well I was expecting the mention of drugs, so here's my offer:
--
It had not been an overly long case but it had taken a toll on my friend.
For two hours since we arrived to the flat, he did nothing but eat enormous amounts of food and chat animatedly on various subjects, until I suggested to move ourselves to the chairs in front of the fireplace.
He, of course, complied at once, thinking my old war wounds were bothering me.
Half an hour after we were comfortably seated by the hearth, he fell asleep so deeply, for he had not done so in days, that it gave me time to observe him.
My eyes went from the delicacy of his eyelashes, so dark and full that they framed the grey eyes underneath beautifully, to his left arm, an incredible contrast; strong and sinewy but so marked from years of abuse.

What kind of friend was I, that I let him do that to himself?
Collapse